Very seldom is the hotel or accommodations the highlight of a trip, but it was this time.  The Nines is in the Meier & Frank Building which is an old landmark from 1915.  According to Travel Portland, the building was designed by Albert E. Doyle.  He is also responsible for many other buildings in Portland from that time. The Frank & Meier also houses a Macy’s on the first 5 floors.  The top floors are occupied by The Nines.

The Nines opened in October 2008.  Not only was it a historic renovation, but it was also a environmental renovation.  The hotel is anticipated to receive a Leadership in Energy and Environmental Design (LEED) Silver certification from the US Green Building Council.  In the redesign of the inside of the building, they gutted the top floors to create an expansive atrium.  About 24 million pounds of material was removed from the inside, then recycled.

The Urban Farmer restaurant within the atrium at The Nines

Carving the core of the old building to create the atrium was necessary to give each guest room a view of either downtown or the atrium, [Gary Golla of SERA Architects] said. He said 24 million pounds of building material was removed and recycled during the building’s renovation.

The Nines will save 500,000 gallons a year by using dual flush toilets and low-flow faucets. In addition, the hotel will draw 100 percent renewable energy, including wind-power and carbon offsets.

The rooms were also stunning.  Plush bedding in a modern, yet nostalgic, room set up the whole atmosphere.  A nice touch was the jazz music that greets you as you enter your room.  The jazz definitely helps to set the tone.  I was very happy with the dual flush toilet.  You can totally tell the difference in water use.  The low flow shower head was like a natural rain pouring over you.  Who said that you had to sacrifice the environment for luxury? 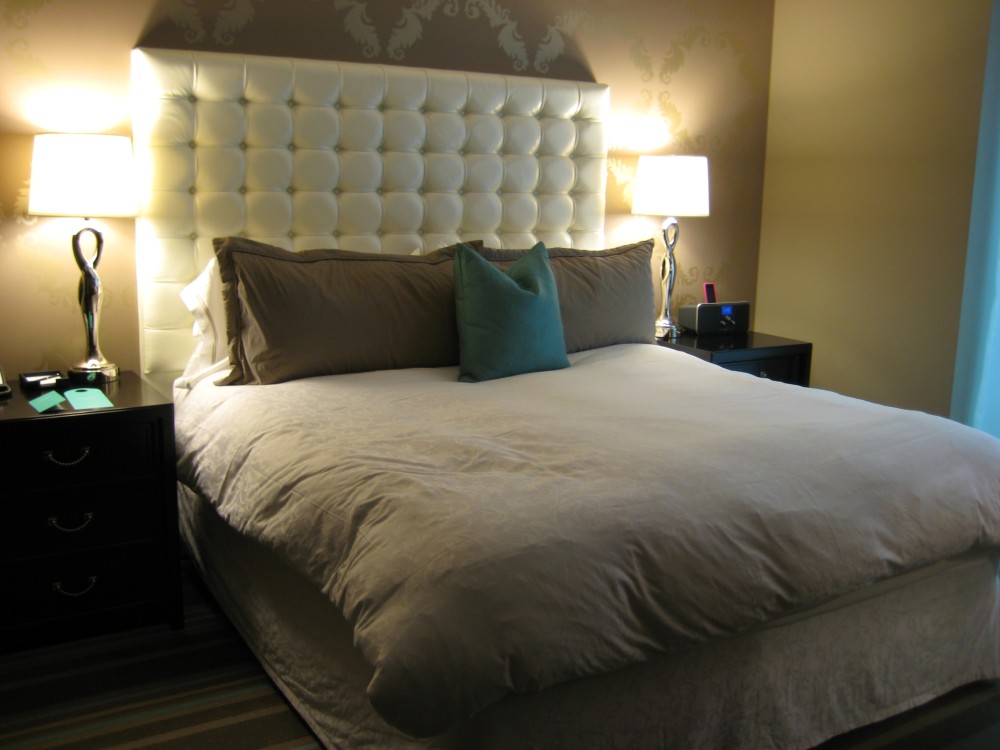 King Size bed at The Nines

This was one comfortable bed, too.  You could do cartwheels or somersaults on this sucker.  It was a very good night’s sleep.  An the radio with the jazz was great.  In fact, the sound was so good, I’m going to look and see where I can get the same radio with an iPod dock.  It was that good.

To top things off, The Nines is situated right downtown kiddie-corner to Pioneer Courthouse Square.  Pioneer Square is also known as Portland’s living room.  It’s a great big public square where a lot of weekend events happen.  It is also home to the travel information center where Arnie gave some great directions with a very amiable wit.  On either side of Pioneer Square are also stops for the MAX, Portland’s light rail transit system.  All the lines stopped at the square.  The new Green Line that will open later this year will also have a stop at the Square as well.  Four or five blocks away from the hotel is the Portland Streetcar that runs north-south through downtown and connects trendy Nob Hill and Pearl District to the new high-rise condos of the South Waterfront.  The location was definitely very convenient and in the middle of town.

View of Pioneer Courthouse Square from The Nines

My only knocks against the hotel are the parking and the lack of stores.  Parking had to be valet and was US$32 a night.  That was a big ouch on the wallet.  There was no parking lot below the building as far as I know and I saw the valet guys run a couple blocks away to retrieve cars.  They needed about 10-15 minute warning to get your car, but the service was pretty quick if there wasn’t a lot of people trying to get their cars all at the same time.

Then there was the lack of stores.  There was Pioneer Place across the street which is a higher end shopping center complete with Juicy Couture and Louis Vuitton, but I didn’t find any shopping streets in and around the hotel.  There was no Robson or Granville Street type shopping as far as I could tell.  It’s probably because this area was more the central business district.  I would have liked to see some more original local stores along the street, but I was just probably not in the right place.

However, at CAD$125 a night, I think it was a steal for me.  It was a special opening promo, so I doubt they have the deal any more.  I quickly checked Expedia for what the current price is now and the cheapest is CAD$225.  So if you are planning to go to Portland and have extra cash on hand, The Nines will likely be for you.

We also got a chance to dine at the Urban Farmer in the atrium, but I’ll save that for another post with more pics.