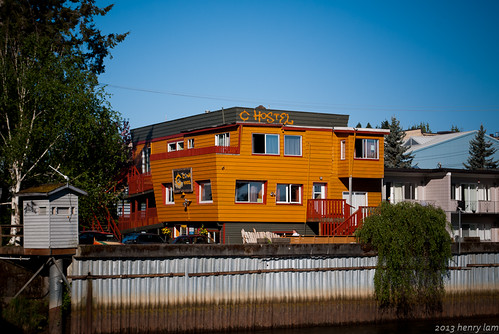 Just beside the hostel, is the Fifth Avenue Bridge.  It’s a pretty old bridge that connects Courtenay with the rest of town that’s on the east side of the river.  It’s a short bridge that is quickly crossed.  Thankfully, it’s not a very noisy bridge like the metal grate bridge just downriver beside the Best Western. 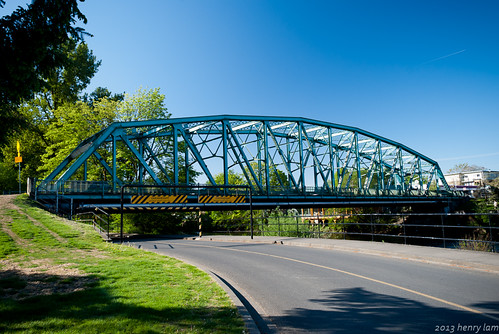 On the other side of the bridge are a couple of parks.  Lewis Park has large baseball diamonds.  Baseball/softball seem really popular in Courtenay.  Games in the spring seem to happen almost every evening and all day and evening on the weekends.  I know because we were woken up at 8am on a Saturday morning to the cheering of the teams across the river.  The other park is the Simms Millennium Park which a small nature park complete with boardwalks.  A quick trot around the park allows you to enjoy the riverside and the tiny little forest enclave in the park. 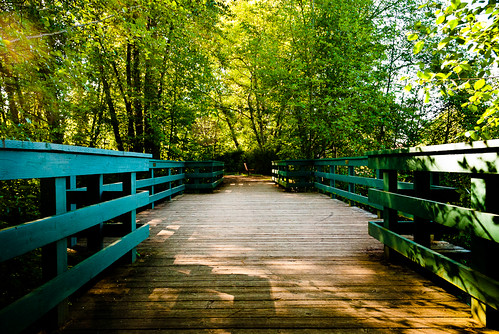 At the Cona Hostel, there are dorm rooms and private rooms.  We ended up getting a private room on the river side of the building. We had our own little balcony to enjoy the view of the river.  This view was great at dusk.  We also had a prime view of the baseball diamonds across the tiny river. 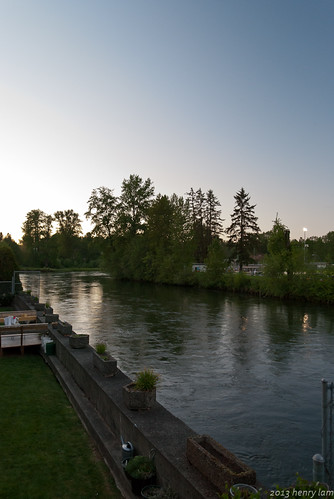 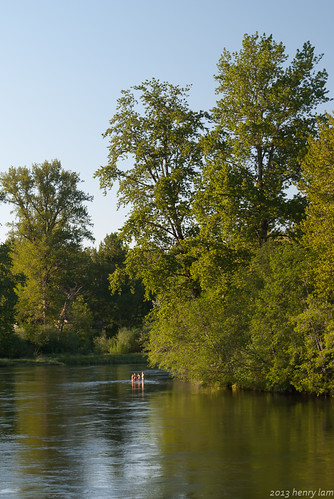 The main floor of the Cona Hostel contains the hostel office, the living/recreation area, the dining area, the kitchen, and laundry facilities.  The second floor has private rooms.  The third floor has all the dorm rooms, which are separated into male and female dorms.  There was talk about a suite on the top floor with its own kitchen, but I never saw it myself. I have no photos of the interior of the hostel, you can check out the Cona Hostel’s own website.

I give the Cona Hostel an enthusiastic thumbs up.  The people were friendly. Brian, one of the owners, was helpful and accommodating for our stay.  I got to meet people from Germany, Spain, Greece, and Switzerland.  I got to practice my French a little with the Swiss girl who was there briefly.  There were other Canadians also.  Some had just finished their winter jobs up at nearby Mount Washington.

The hostel is relatively clean as well.  It’s a hostel, so don’t expect the Hilton.  But it was clean enough.  There was one incident of theft, which was pinned upon a resident, but it was safe overall.  It’s close to downtown so you can walk to many shops.  They have a few bikes on site for you to borrow if you like.  Also, Cona Hostel seems busiest in the winter when ski season hits at nearby Mount Washington.  However, the ski hill is in some financial troubles now.

So give Cona Hostel a thought if you are travelling up north on Vancouver Island.  I think it will be worth your time and stay.