Hong Kong Island is one very hilly place. Most visitors and tourists would only venture up the hillside to visit The Peak. Even then, most people would likely take The Peak Tram (which in itself is a tourist attraction). If you have an extended period of time, then it may be worthwhile to explore off the beaten path into non-touristy Hong Kong.

On this January Sunday, I was meeting up with an old high school classmate. I don’t think I had seen him since my university days in Vancouver. So it was a great chance to meet up with him and his wife. We had set a time to meet at the Starbucks at Park Road and Bonham Road. Okay. I’ve heard these street names, but I had no idea where it was. Thank goodness for Nokia Maps and their downloadable city maps.

On my map, I found the intersection and ran a straight line down from there to the tram line along Des Voeux Road. It happened to follow along a street called Eastern Street. This street would be the subject of my pre-meeting exploration.

First of all, I had to get to Eastern Street. That’s when I hopped on the very cheap tram (HKD$2.30 – that’s like  just over 30¢ Canadian). After a scenic ride on the upper deck of the tram, I got off at Eastern Street. I started right down at Des Voeux Road and Eastern Street. As I started to walk up Eastern Street, I could see the street go straight up the hill. I guess this was the climb I was looking for.

On the way up the hill, I crossed Queen’s Road West. That was the road I had walked along with my sister and uncle a few days ago. The road was as busy as ever with taxis leading the queue at the intersection. I love the giant cow-shaped neon sign along this stretch of road. It must be one of the most original signs in Hong Kong. It’s not everyday that you seen a giant brown cow branded with neon hanging roughly 3 stories above your head. 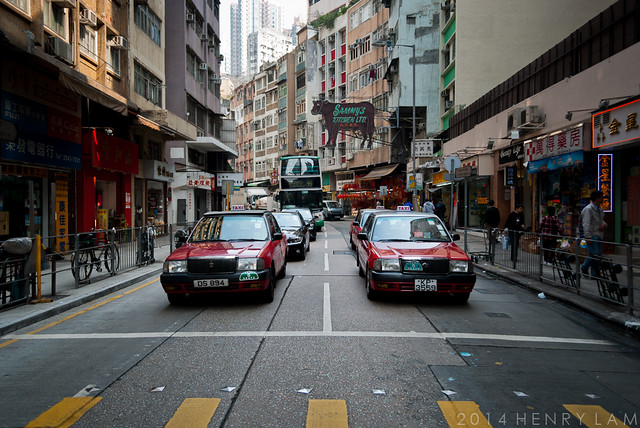 Eastern Street itself is probably not the most interesting street in the world, but it offered glimpses into little corners of life in Hong Kong. My favourite was stumbling across a tailor whose shop was literally in a dark alleyway just off of Eastern Street. Who knows how long his little shop has been here? All he had to light his work was the single fluorescent light and whatever natural sunshine could bounce its way into the alley. 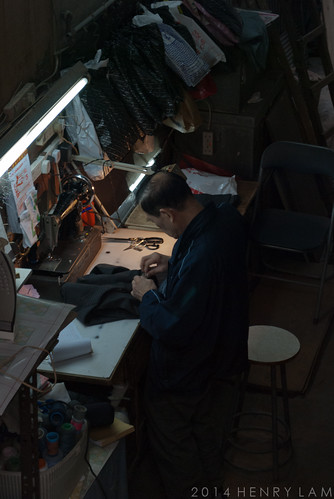 There was some good old shop signage along the way up Eastern Street. Apparently there’s a Chinese Tea Shop around here somewhere. Perhaps somewhere in the building of the wall I just photographed. Or maybe it’s a part of the Kinetic Company Ltd. The Chinese above the English suggests that Kinetic Company Ltd sells tea. 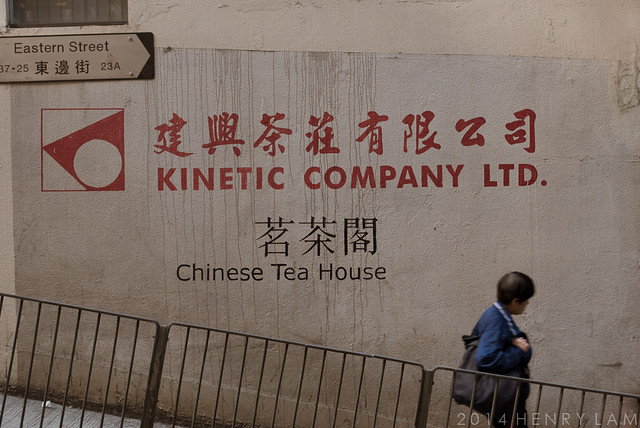 In this part of Hong Kong, there’s actually a fair amount of trees growing everywhere. The roots of these trees seem to grow wherever they can. On the side of walls, along the water pipes, or surrounding street signs. Tree roots seem to be common in this part of town. Even trees learn how to cope with the dense urban jungle that is Hong Kong. 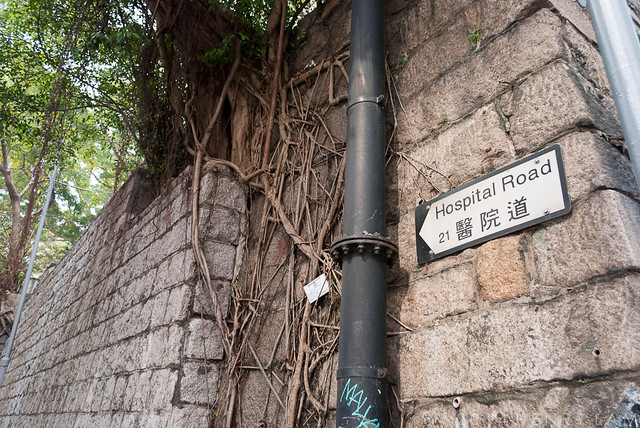 Looking down some of the roads crossing Eastern Street, one can sometimes see pretty far. Other times, they are just short alleys where people park their cars and scooters. When I got close to the top of Eastern Street, I had reached High Street. Yes, at this point, I’m pretty high up from the water. I guess that’s where the street name comes from. It’s definitely not the kind of high street with shops. There were just lots of cars and motorcycles parked on one side of the street as far as the eye could see. 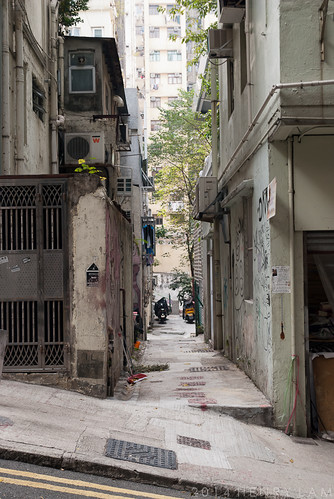 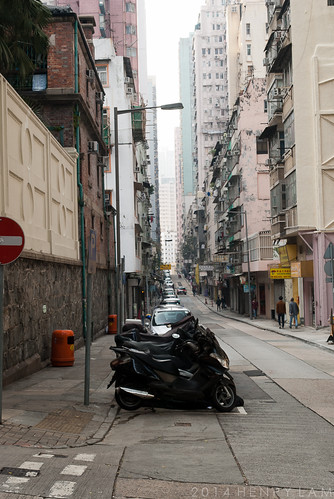 After High Street, Eastern Street ends as a set of stairs that finally took me up to Bonham Road. Once I got onto Bonham Road, I finally realized that I had been here before. My aunt and her family used to live in this part of town. The roads and buildings in the area were familiar. There was the little lane of shops perched above the main road. There were the stand of trees whose roots grew down along the wall down to the road. (This scene is either an arbourist’s dream or nightmare. I’m not sure which.) 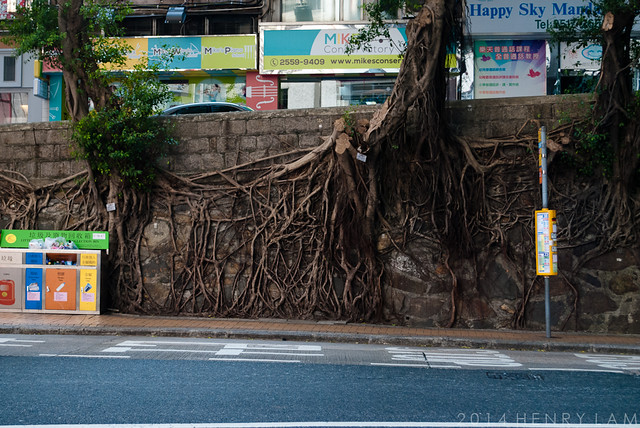 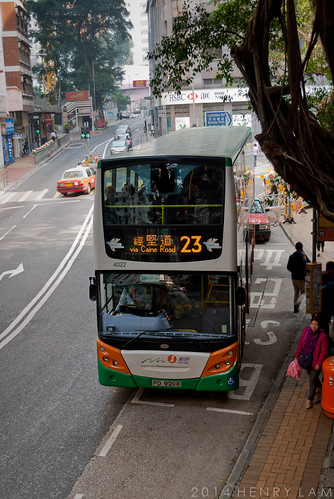 Here’s the little lane that I clearly remember walking along well over a decade ago. This is St. Stephen’s Lane. I still had some time so I explored up and down the lane. The lane snakes its way between the road and shops before sneaking it’s way in between apartments to a set of stairs on the other side. I love finding little urban nooks and crannies like this when exploring. 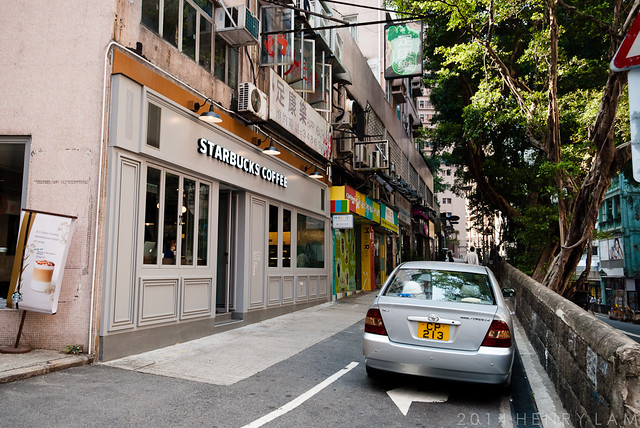 A quick glance of the watch told me it was almost time to meet up with my classmate. Plus, I was really hungry after climbing up all this way to the Mid-Levels. We were going to meet up at the Starbucks anyway, so I grabbed a quick bite to eat in the coffee shop. It was an amazingly good roasted duck wrap. You gotta love the local dishes you can get at places like Starbucks or McDonald’s. 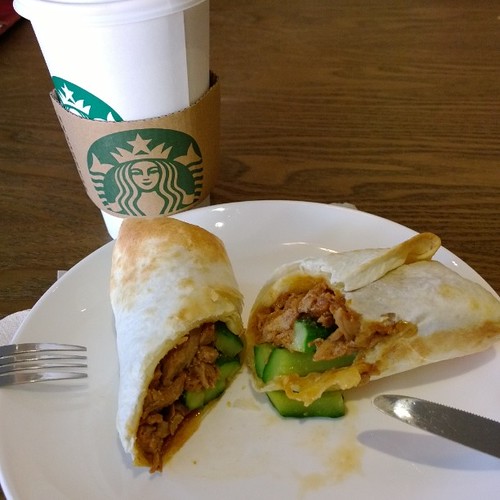 Just as I wolfing down my snack, my high school classmate came in. We spent a better part of an hour or so just catching up. This Sunday was definitely a good day for memory lane.