We had finished our first week of Japanese language classes at JaLS and we were upon our first full weekend in Hokkaido. We originally tried to get bus tickets to Hakodate for the Saturday, but all the times we wanted to take were sold out. So we decided to visit Otaru this Saturday instead.

Otaru is a about a 40-60 minute train ride on the JR train. If you grab the Local train, then it stops at every single station. However, if timing works for you, then you can grab one of the express trains and bypass all the smaller stations. Regardless of the speed of the train, the ticket still costs ¥640 for a one-way ticket. The ride from Sapporo to Teine is all above ground and offers a view of the city from high above the streets. However, soon after Teine station, we are travelling right along the coastline of Ishikari Bay until we reach Otaru.

Otaru is not a very large town, but it was bustling with tourists. I must have heard Japanese, English, Mandarin, and Thai everywhere I walked through town. Otaru Station itself is a modest little train station. It’s not like the massive shopping and transport complex that is Sapporo Station.

To the left of the station, as you exit, is a tiny little seafood market. You’ve got to wriggle your way into the hiding market. This is the tiny 三角市場 (Sorry, I can’t find the English name). It’s not very big, but it is worth a peek inside. Plenty of shopkeepers trying to wrangle tourists into buying or eating something there. However, we found it kind of dark and slightly uncomfortable inside. So we decided to go elsewhere.

We ended up opting for Mister Donut across the street from the market and the train station as our first pitstop of the day. Mister Donut is a fast food giant in Japan. It’s perfect for donuts and coffee. (Hmm…sounds like Tim Horton’s in Canada) It’s signature donut shape is the eight little balls combined into a donut known as the “Pon de Ring.” We needed some sustenance in the tank if we were going to walk around Otaru all day. We had picked the matcha flavoured donut, of course. The match was really good, but so is the texture of the donut. There’s a certain chewiness to the donut. It’s not just doughy like some donuts, but it has a unique chewiness that I don’t think I’ve ever had in another donut.

We walked down the main road that goes straight to the water from the train station. The road slopes down towards the water. At the bottom of the hill is the famous Otaru Canal. I was wondering why all the tourists weren’t congregating on this side of the canal. Apparently this end of the canal doesn’t have the “right view.” It may be too small in the photo, but most of the tourists are at the other end taking photos back this way.

The canal was meant to serve the warehouses that line the canal. In Otaru’s more industrial past, boats would have come right up to the large warehouses to deliver and load goods. Nowadays, it’s the perfect historic backdrop to a popular tourist town. It’s also perfect couples riding rickshaws on a sunny day too, apparently. 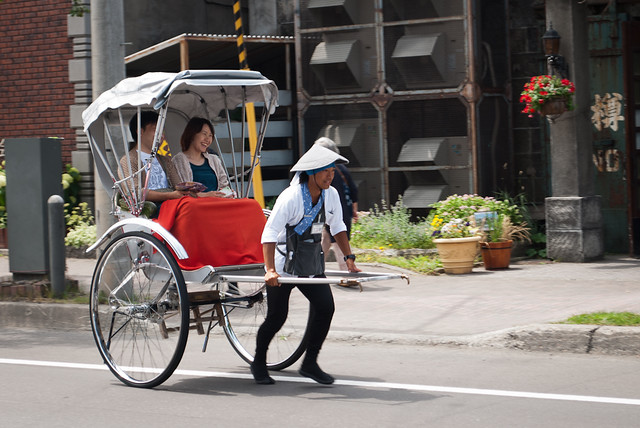 We finally found our way to the “right end” of the canal. This end was the tourist hot spot. There were a lot of tour groups here. About a block away from this spot is where all the touring coaches parked. So no wonder all the tourists visited this end of the canal. I guess it’s a nicer view of the buildings across the street from the canal. It helps that there’s a tourist kiosk and photo op spot all laid out at this end.

There was this neat little building kiddie corner to the photo spot on the canal. It was designed to look like a collection of old Japanese buildings. However, I’m pretty sure they weren’t all that old. The tiny complex was filled with different restaurants and snack stops. Good food to feed the tourists.

We had walked further down the road past a men’s suit store and a few restaurants complete with their own parking lots to a small ice cream shop. We noticed that they had lavender ice cream on the menu. Lavender ice cream is a pretty exclusive flavour to Hokkaido. So we really wanted to try it. Didn’t we just have donuts not too long ago?

We kept walking for a while down the street by the canal, but there didn’t seem to be too many shops along that stretch. We were starting to wonder if there were any shops anywhere. Otaru is a well-known tourist stop in Hokkaido, after all.  It wasn’t until we had walked further along and entered a couple of warehouse-like buildings that we realized something. We could see that people were mostly coming through the opposite entrance of the building. We had been basically walking along the wrong street. We had been walking parallel to the main tourist stretch and didn’t know it. Oops. 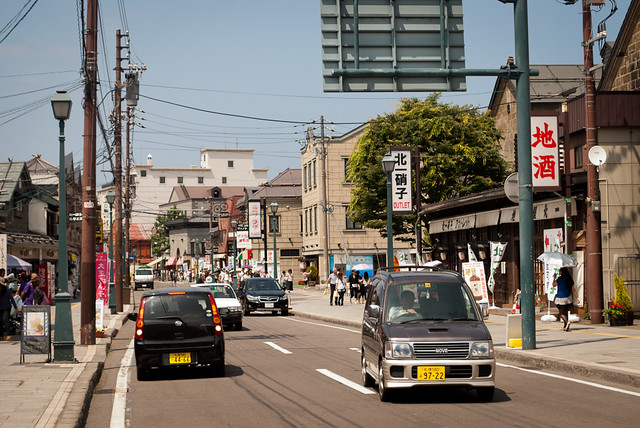 We rectified that situation pretty quickly and adjusted our trajectory to follow the busy tourist street. This street was full of little shops. All the buildings were brick facades that gave a very industrial feel to the street. We had missed most of the street because we were walking on the wrong block, but we were almost at one end of the street anyway. So we start over from this end and head back to the other end.

Otaru has two famous souvenirs that most people purchase. One is Murano/Venetian style glass figures. The other is music boxes. The most famous of these music box stores is in a brick building at the end of the tourist stretch. It’s the Otaru Music Box Museum. It’s really a store, but it’s extensive collection includes unique not-for-sale music boxes too. It’s a huge 3-storey store filled to the rafters with music boxes. There is such a great and wonderful variety of music boxes here. Even if you don’t buy a music box, it is well worth the visit to explore the impressive collection. 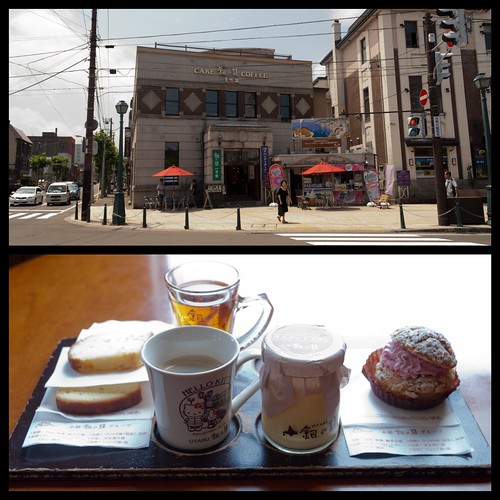 Another popular spot to visit in Otaru is right across the intersection from the Otaru Music Box Museum. This is the Gin no Kane (meaning “Silver Bell” in English) cake and coffee shop. The first floor is a souvenir and food shop, but the second floor is the cafe.  One can purchase a coffee and treat set there. They have collectible cups and saucers that come with the set. So after one is finished relaxing with the petite cup of coffee, one can wash up the cup and take it home with them as a souvenir. We were lucky that we arrived at Gin no Kane when we did. As we were ordering our coffee and treat sets, a large Taiwanese tour group arrived behind us and took up most of the tables in the place.

Having had our “lunch”, we ventured back out onto the tourist street. There are a lot of cute little buildings along this stretch of road. After a while, though, you will find that many of the shops repeat. For example, Le Tao is a well known Otaru cake shop and there are a few Le Tao’s in this area. Each shop specializes in something a little different, but you see the name and logo a few times along this road.

Food is another big draw in Otaru. Hokkaido is famous for its seafood. So we really had to try. We found a place where you pick your own fresh items out of the large crates filled with water. We picked out a scallop, a sea urchin (uni), and a surf clam (hokkigai) to have. It cost about ¥1500-2000 for the 3 items. It’s not super cheap, but we figured it’s fresh and grilled for consumption right in front of our very eyes. This was well worth it.

There are also many other snack and food places. We had a potato mochi type snack on a stick. That was only okay and it was like dripping in butter with another slab of butter sliding around on top of it. There was also the famous Hokkaido melons for sale. There were different levels of melons. The higher quality melons obviously would cost you a lot more to eat. Those slices would have cost about ¥1000 to eat. That’s per slice! I didn’t feel like spending so much. So I ordered a lower quality melon that cost about ¥500 to eat. It was pretty sweet, but I’m sure I can get pretty good whole melons back home for the same price.

We wandered a little more up and down the street looking at different gift shops. One shop right beside a tiny canal branch specialized in glass gifts. In the back, there was a little workshop that people could sign up for and try their hand at glass making. Staff were on hand to guide potential glass artists in making their first ever glass beads to take home for a memento. Obviously, language would be a barrier for most of us foreigners travelling through Otaru, but it was fun to watch Japanese tourists try their skills at glass making.

After all the walking around this tiny town, we were pretty tired and headed back to train station by the late afternoon. We ventured back to the station via this covered shopping arcade. The arcade was a colourful place, but it was strangely quiet shopping arcade for a Saturday afternoon. Perhaps the tourists never venture here and maybe only the locals shop here.

No matter. We were eager to go back to Sapporo because the shared house we live in had a okonomiyaki (Japanese pancake) party planned. We hopped on the train, dozed off in our seats, and headed home.