We couldn’t have picked a better day to end our 4 weeks of classes at Hokkaido Japanese Language School. It was our last day and we would be going to see fireworks in the evening. However, along with fireworks, comes yukata. Yukata are traditional Japanese clothing similar to kimono, but they are much lighter and less complex to put on. However, to us, the uninitiated, we needed help to put on these wonderful traditional pieces of clothing.

It must have taken all the students at JaLS about 2 hours to get into all the yukata. After everyone was dressed up, we started to make our way by foot to the fireworks location along the banks of the Toyohira River. Just imagine all these foreigners dressed up in traditional Japanese wear (including footwear!) making a 35-45 minute trek to the river banks through busy parts of central Sapporo. I’m sure the locals were amused. 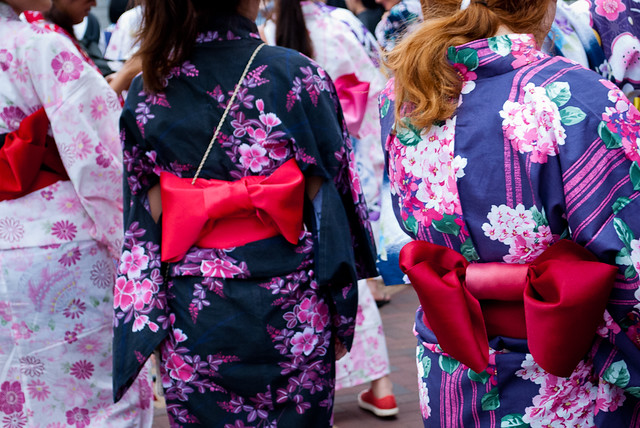 The school also allowed us to make a pit stop at a convenience store along the way. The Australians and Canadians in the group had an epiphany and realized we could have drinks (beer and other spirits) in the park. Back home, the police would be sure to pour out all our drinks, but in Japan, having alcohol in a park is permitted. So a few of us gathered up cans of cider and beer to take to the park along with snacks.

The teachers had already prepared giant tarps for all the students to sit upon. There must have been close to 40 of us – students, teachers, and more. We were almost right up to the barrier that separated the audience from the fireworks grounds. The school was definitely thinking ahead on this one.

Even though we must have waited about 2 hours or more for the sun to set and the fireworks to begin, we were all happy in each others’ company. People were chatting it up in English, Japanese, and more. Cans were raised in good cheer and laughter shared. Before we knew it, the sky had darkened and the crowd behind us had grown significantly.

Then the fireworks show started. Having watched so many anime, it was special to watch fireworks in Japan. Fireworks always play a large part in anime that take place in the summer. It is definitely a summer tradition in Japan and one that is deeply etched in the Japanese psyche.

Again, it was just the best day for our last day at JaLS. It was a bittersweet happiness that we were saying goodbye to our new friends and our teachers. But we couldn’t have ended things better than with a bang – literally.