Last Friday, I had a few errands to run. I had in my mind that I didn’t want to take the car. I was going to end up downtown and I knew it would be much easier to not have the car hindering me while going downtown. So I decided to take a combination of the bus and SkyTrain.

In the end, I had what I would call a great transit day. It’s amazing how much can get done by transit with a little planning. It also helps to have easy access to rapid transit and frequent bus service. You see. Transit can and does work in Vancouver. And that’s mostly thanks to TransLink.

My wife and I set out at about 10:15 to the bank. I had to get something done at the teller instead of online. So we walked up to Kingsway and did the teller queue and all. No wonder I prefer online and ATM banking. We were done in about 20 minutes or so.

Errand 2 – Medical Office on Victoria Drive and an Early Lunch

Blood tests – gotta love them. We hopped on a #41 bus at Joyce and Kingsway. We didn’t wait long at all. When we arrived at the bus stop, I saw the 41 making it’s way up Joyce Street from Joyce Station. No thinking or waiting. Just hopped on he bus.

We got to the med lab around 11:15. I remember because the med lab tech asked when was the last time I peed. These are the strange things that one can recall. We didn’t have an appointment and the lady said the wait could be up to 50 minutes. It was really busy in the waiting room.

We hadn’t had breakfast and it was almost 12. So we decided to grab a quick meal at Mui Garden. Mui Garden is best known for Hainan Chicken and Curry Beef Brisket dishes. The prices for those two specialties were both over $10. I opted for a set-meal for about $8.

We scarfed the food down quickly and had to get back to the lab around 11:45. If they called my name early and I wasn’t there, then my name would be put to the end of the queue. That’s no good. I was called in about 10 minutes later and the deed was done. What? No sticker for the pain? I guess I’m not 8 years old anymore 🙂

The next stop was the optician. My old glasses had been bugging me like crazy and sliding around on my face. I had ordered the glasses a couple of weeks before and it was time to pick them up.

This time we got back onto the westbound #41. Again, we didn’t have to wait long. Although during the short wait, we spied a few pigeons picking away at the dried food goods outside the Chinese medicine shop at the bus stop. Reminder to self: never buy anything from this shop.

We took the quick ride over to Main Street and dropped into the opticians. It’s always fun to visit my opticians. One of them is actually my neighbour and he takes the bus every day to work too. His coworker and sister doesn’t quite understand why he takes the bus all the time, but that’s okay. At least I share the same sentiment.

The glasses were ready and quickly placed upon my face. Good fit. Little adjustment was needed. We chatted for a little bit more and we were on our way again.

Okay. This really wasn’t an errand. It was an excuse to use the washroom at Oakridge Mall and we wandered the mall for a bit since we had time.

We had to get on the #41 for a 3rd time. Again, we probably didn’t wait more than 7 minutes for the bus to come. It was a really clockwork day for the #41. (Usually the bus is not so clockwork during the afternoon rush) We hopped off at Cambie and wandered into the mall. I paid my hydro bill. Wandered some more. In the end, we didn’t buy anything, but the washroom break was welcome.

Again, this isn’t really an errand, but this was part of our ultimate destination for the day. We were interested in taking a look at the free Warhol exhibit going on in Yaletown on Homer Street. 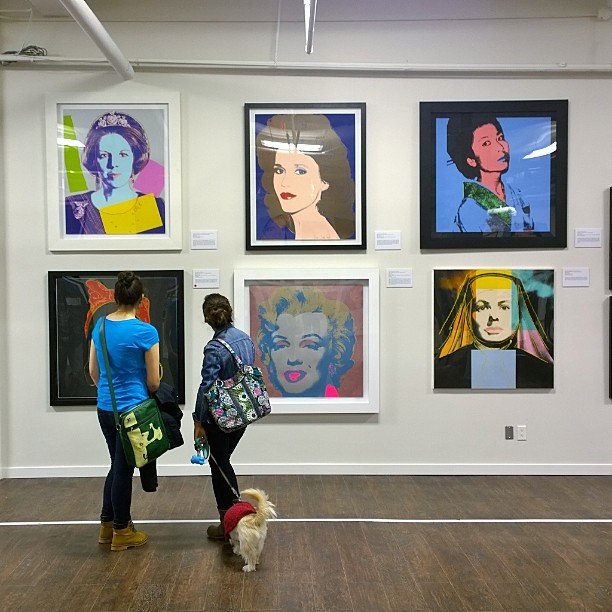 To get to Yaletown from Oakridge was easy-peasy. We entered the 41st Avenue-Oakridge Canada Line Station. Hopped on the Waterfront bound train that came within a few minutes. The ride took all of 8 minutes to get to Yaletown (the drive would have taken 15 minutes plus looking for parking). We exited the station and walked over to Homer. Nothing could have been simpler.

After perusing the art for about a half hour, we headed back home. Instead of going underground again, I suggested we walk along Homer Street and zig-zag our way to the Expo Line’s Stadium Station. Along the way, we stopped off at a few shops to peruse and to buy some Kleenex because allergies are awful this year.

We got back onto the Expo Line and got home in about 15 minutes once we got on the train. We were back home in the middle of the afternoon around 3pm, but we had done so much. Again, it was all thanks to a wonderfully efficient (including the bus) transit day.