After having checked into our Airbnb flat, we wanted to make the most of our first afternoon in Paris. That meant going out for a walk in nearby Montmartre. 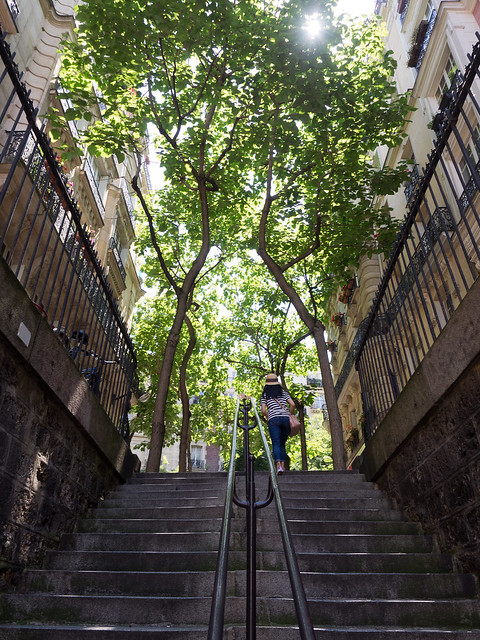 In the area around Marcadet-Poissoniers, the streets were busy and full of boisterous African francophones. Life bustled and stores had their wares on display. However, after a few blocks walking west along Rue Ordener, the scene quickly changed. The streets were instantly quieter and the buildings more orderly. 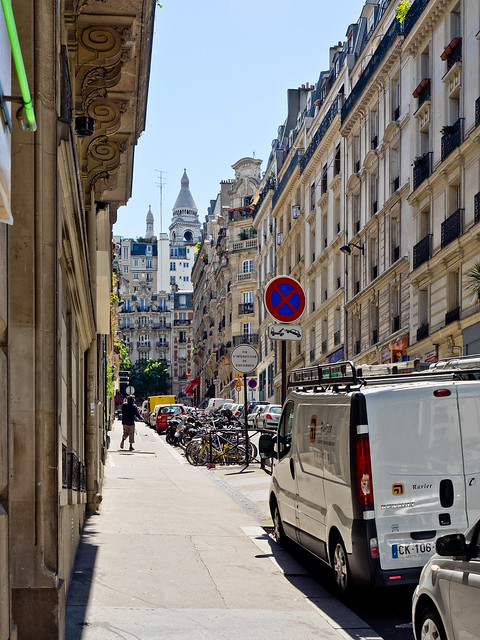 From certain vantage points between the buildings, we could make out the white spires of the Basilica of Sacre-Coeur. That would be the ultimate goal of our walk. However, my plan was to circumnavigate the hill of Montmartre before ascending to the top. 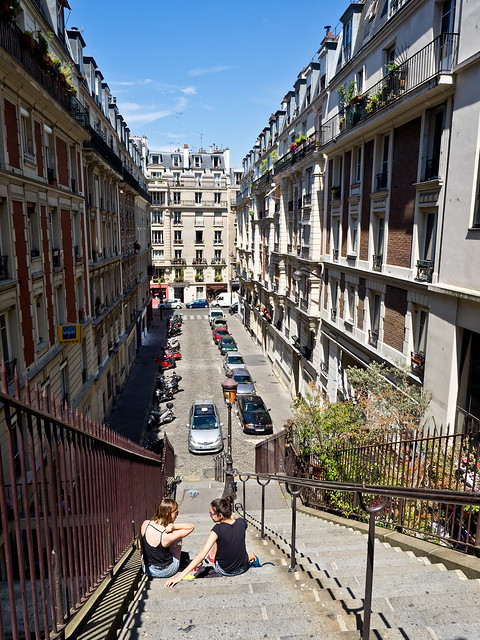 Even when going around the base of the hill, we still had to climb up at certain points. Most of these points had staircases. These were classic Parisian staircases complete with Parisian street lamps and Parisians occupying the steps.

Our first planned stop was a little patisserie on Rue Caulaincourt. One of my wife’s goals on our trip to Paris was to visit all the places featured in the first minute of an EVA Air commercial featuring Takeshi Kaneshiro. The patisserie can be found at 0:49 in the commercial. 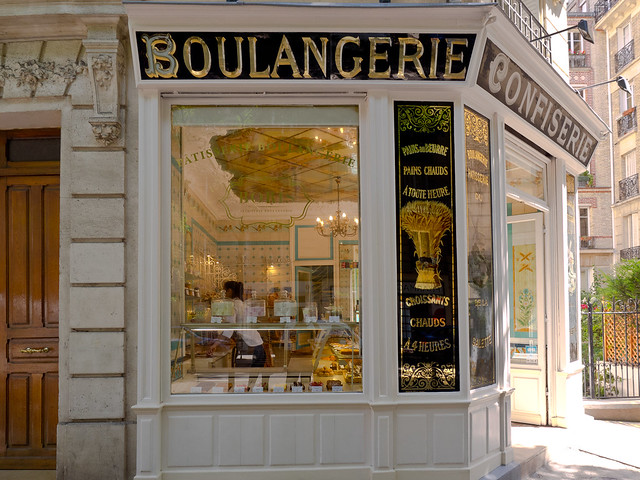 Boris Lume la patisserie is a tiny bakery and pastry shop found on the corner of the Rue Caulaincourt and a small square on the side of the road. The beautiful exterior is marked with golden letters in an old-fashioned font etched on glass placed over black backgrounds. It truly is tiny on the inside, though. There were only two glass display cabinets on the inside. 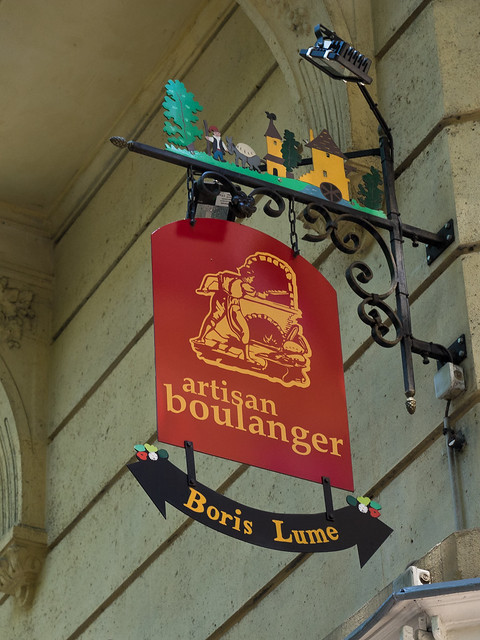 It was mid-afternoon and it was quiet on the inside. We bought a little something to sample their food. We weren’t very hungry, but we still wanted to try a pastry. Funny, though. I don’t seem to have a photo of what we ate. That’s really rare for us.

We continued along Rue Caulaincourt and found that the road bisected the Cimetiere de Montmartre. I wasn’t all that interested in visiting any famous spirits. So we just simply walked past the cemetery, but we could see inside from the road. That would suffice. 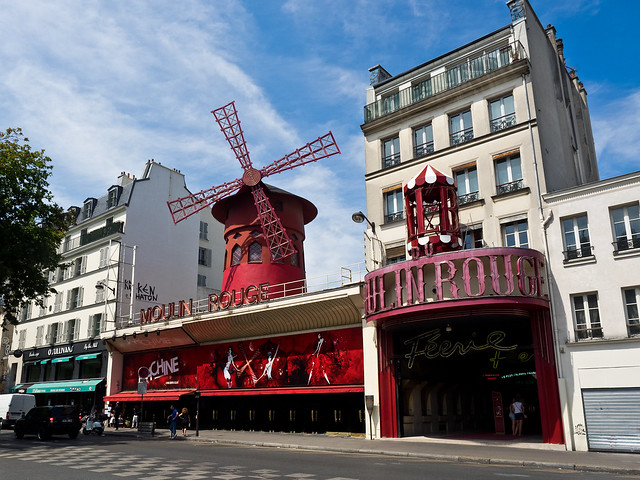 We rounded the corner at the Boulevard de Clichy and made our way down one of the shadier strips in Paris. This is where the famous Moulin Rouge can be found. We joined many a tourist in the middle of the boulevard taking photos of the famous red windmill. 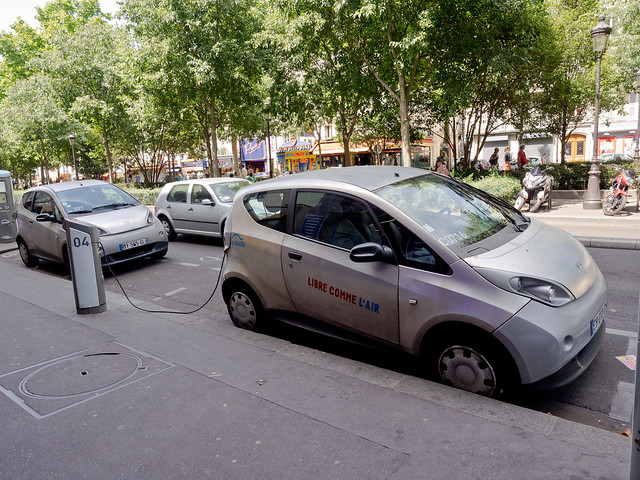 Along the rest of Boulevard de Clichy, we passed by so many of those adult stores. It was so cliche. What was more interesting to me was the Autolib. Autolib is a car-share service in Paris that uses electric cars. There were a couple of these 2-door cars charging up along the boulevard. 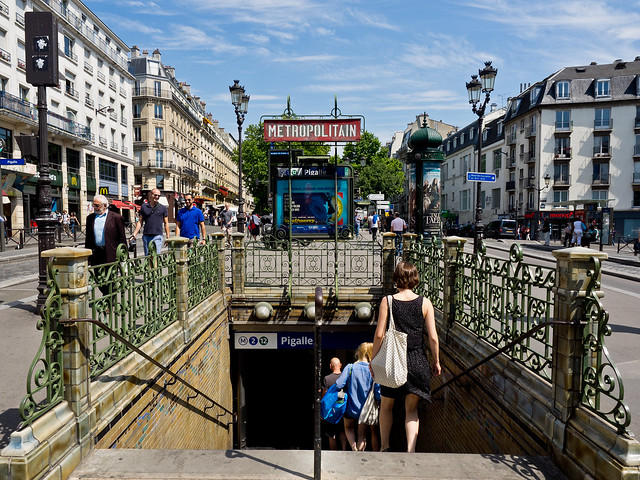 After passing Pigalle Station, we took one of the side streets up the side of the hill towards the top of Montmartre. We made our way to Place des Abbesses. This is where you can find the tiny carousel featured in the film, Amelie. 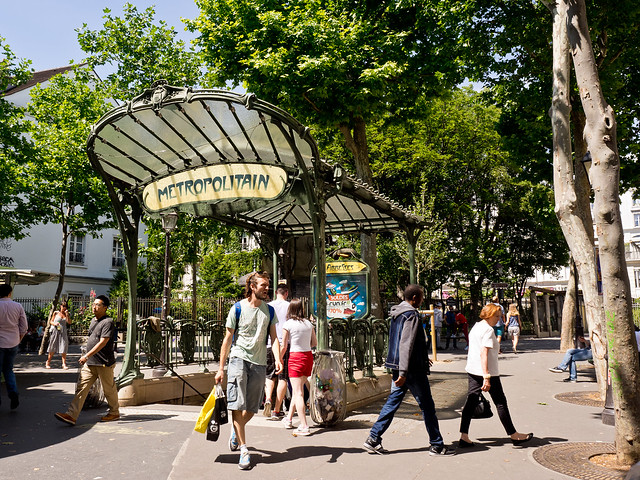 While at Place des Abbesses, we explored the Kusmi Tea store. When I was in Quebec City in 2013, I had bought some Kusmi Tea to bring back home. It was really rich, flavourful tea. So I was more than happy to finally step inside an actual Kusmi Tea store. However, I decided not to buy anything. Since my trip to Quebec City , I have discovered that there are a couple of stores in the Vancouver area that carry Kusmi Tea. So it wasn’t worth me lugging tea back home. 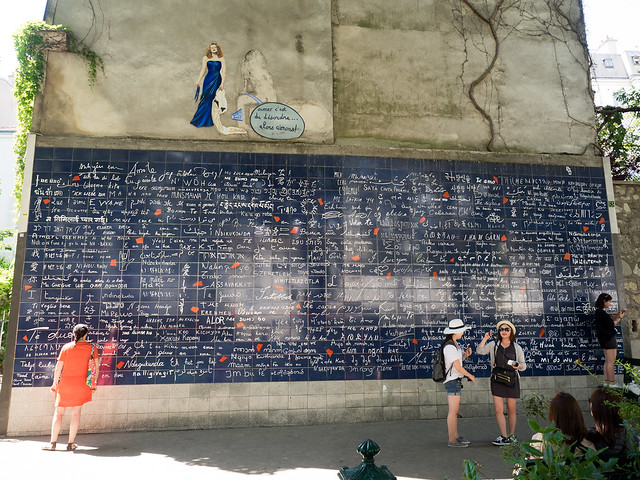 Just behind Place des Abbesses is le mur des je t’aime (the wall of I love you). It’s a large wall with blue tiles. In white all over the wall is the words “I love you” written in different langugages. By the lower right-hand corner of the wall was a group of Korean girls taking selfies with the wall. I assume the Korean words for “I love you” could be found near that corner. 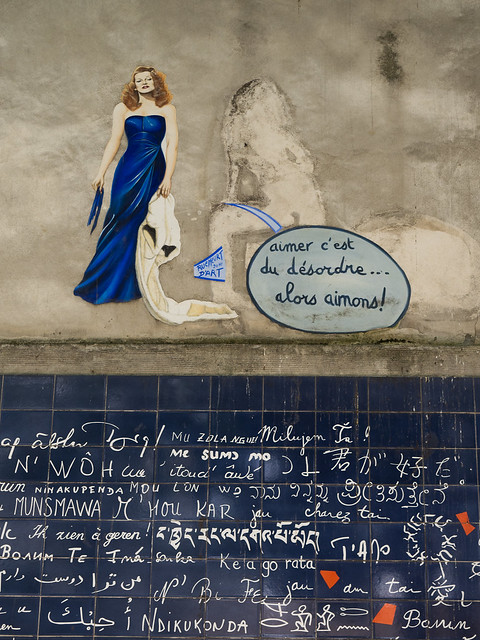 We snaked further up the hill past cafes and vendors at the market in the middle of Place du Tetre. We finally arrived at Sacre-Coeur. The view of the city from here is one of the best in the Paris. It seems all the tourists know that as well. 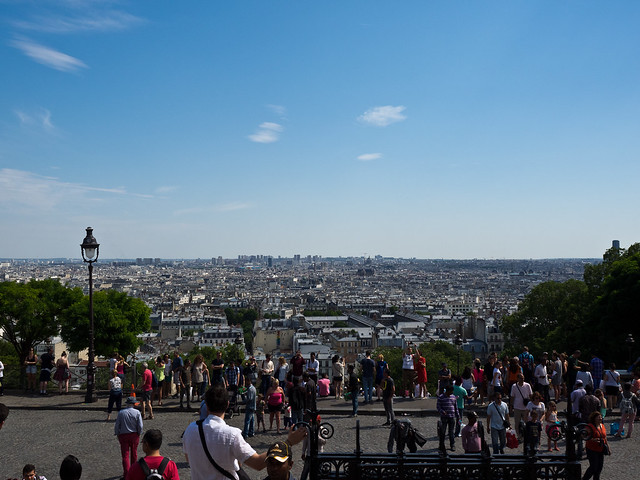 It’s amazing how flat Paris really is. Montmartre is probably one of the highest elevations in the city. So what better to place at a hilltop than a church. 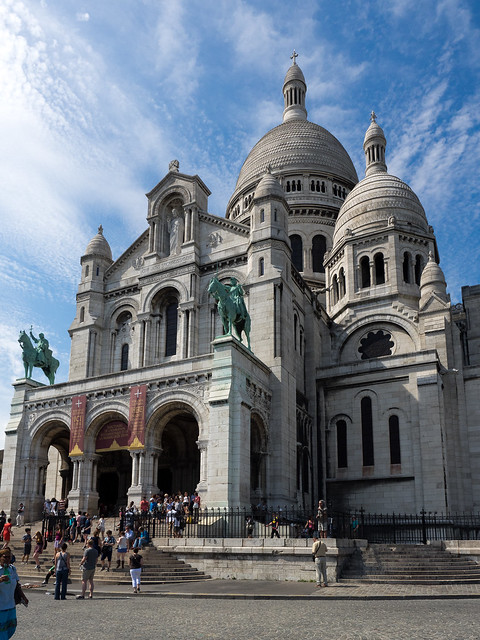 We stepped into the Basilica of Sacre-Coeur to escape the afternoon heat and humidity. It happened to be Friday mass. The angelic voices of the nuns filled the sanctuary. It was quite beautiful. Those who were interested in staying for mass were welcome. Tourists who just wanted to see the church were ushered in a clockwise manner around the edge of the church. I regret not sitting down and just soaking in more of the mass. It’s not because I’m not Catholic. It’s because the singing was so very enchanting and almost magical. It would have been better to have just stayed a few more minutes to listen a little longer.

We exited the church and navigated our way past the water bottle and trinket vendors to go back towards the bottom of the hill. I decided not to venture down the main steps since I knew that would be full of even more shady vendors and solicitations. Later,my wife told me she actually wanted to see those infamous vendors on the main stairs that aggressively sell friendship bracelets. I, on the other hand, had no interest in encountering such hustlers. 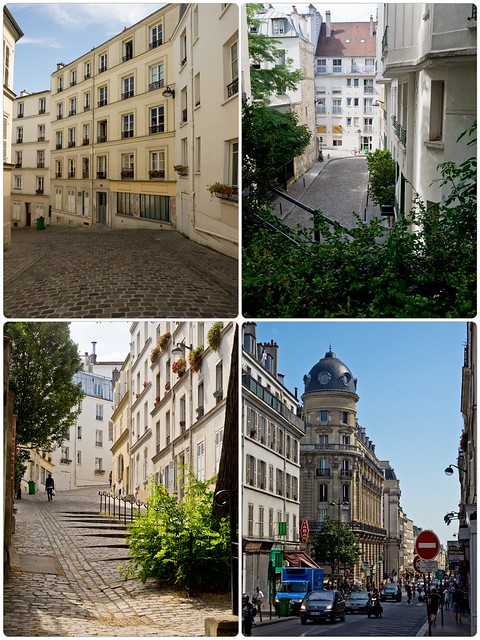 We went down the east side of Montmartre via some narrow and quiet streets. That was much better than fighting with the crowds down the main stairs directly south of the Basilica. We ended up on Rue de Clignancourt at the bottom of the hill. The road was really busy and it looked like a school was letting out the kids just as we passed by.

We headed back to our apartment for dinner and called it a day. My back was all drenched from carrying my backpack. We both wanted to shower after walking in the hot Parisian weather. It was time to take advantage of that wonderful shower in the apartment.

I’ve embedded a Google map of our afternoon walk around Montmartre below. My route does not take people to certain well-known cafes and bistros that might interest other people. There is just so much to explore in Paris.