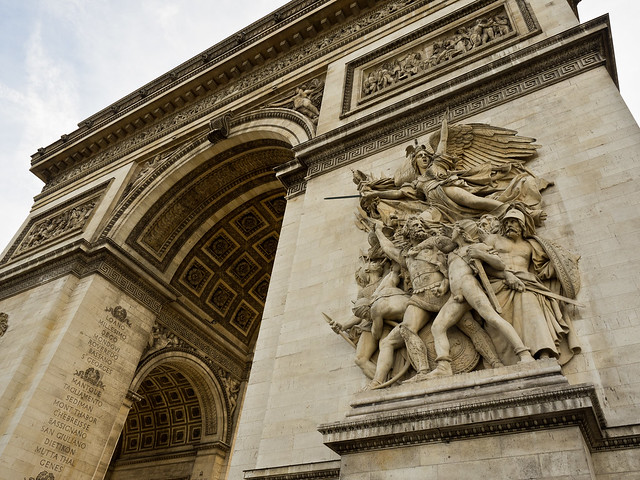 We got off the Metro along the Avenue des Champs-Élysées and rehydrated in a McDonald’s, of all places. It’s hard to find an honest-to-God free water fountain in Paris. So we had to duck into an air-conditioning-less McDonald’s for a couple of bottles of water. Heat stroke on a trip to the City of Lights would be awful.

At the very end we saw the Arc de Triomphe at the end of the Avenue. I had planned to climb the Arc on a different day, but it was only the late afternoon and we had time and energy to do it.

To access the Arc de Triomphe, we had to find the underground walkway that took us under the famous Étoile/Place Charles de Gaulle roundabout in which the Arc is situated. The underground tunnel was filled with tourists and tour groups. The paid entry into the monument was in the underground passageway. Luckily, we had our Paris Museum Pass that allowed us quick access into the site.

At the foot of the Arc de Triomphe is the tomb of the unknown soldier who was interred at the end of World War I. An eternal flame burns at the top of the tomb. The line at the bottom of the Arc is long for people waiting to go up. Again, if you have a pass like the Paris Museum Pass, it usually allows you to gain entry more quickly.

There’s no elevator here in this 19th Century monument. There are a pair of spiral staircases, one in each leg of the arch. The climb takes visitors to the top of the arch 50 metres above the ground below.

In the first level after the stairs is an exhibit and souvenir shop floor with information about the Arc de Triomphe. There is even a large TV screen on which one can spy on the tourists directly below. There was even a special exhibit of French military uniforms through the ages on display at the time of our visit. 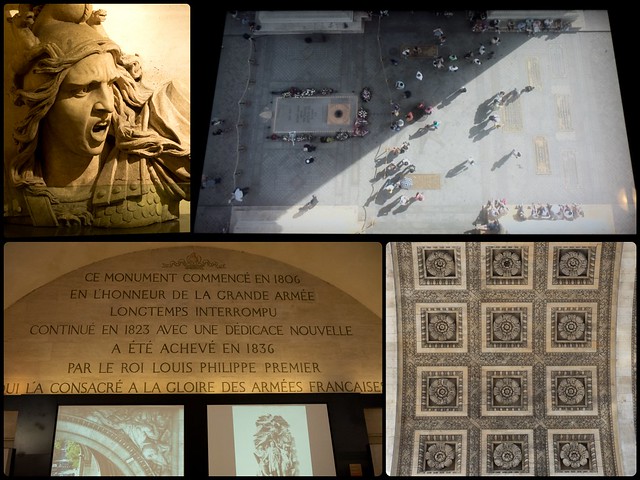 The main attraction of the Arc de Triomphe is the rooftop panoramic view of Paris. At 50 metres high, it is not the highest view by any stretch. However, with Paris being a relatively flat city, one can see pretty far from atop.

A view of the busy and ritzy Avenue des Champs-Élysées is one of the most obvious scenes to take in. The tree line boulevard is definitely one of the most expensive pieces of pavement in the world with all its luxury brand stores.

To the south one can see the Eiffel Tower in the distance. To the west, is the architecturally anti-thetical La Défense. with its gleaming glass and steel skyscrapers. To the north, Montmartre and the Bascilica of Sacre-Coeur are the main attraction in that direction.

Check off another famous French attraction from our list. It was time to brave the spiral staircase again and descend to ground level. Upon arriving at the ground, there looked to be some sort of French veterans event. However, we waited for a little bit, but nothing happened for a good ten minutes. We didn’t have the patience to wait any longer. So we set off to explore the Avenue des Champs-Élysées.

One thought on “Arc de Triomphe”