July 2, 2015 (Thursday) – After a day of exploring Bastille, Le Marais, and the Canal Saint-Martin, we made our way back to the shopping centre of town in and around Opéra. We ended up making our way down one of the boulevards radiating from Place de l’Opéra and found ourselves at Le Grand Café Capucines.

It had been another hot day in Paris and just like everywhere else we went, there was minimal air conditioning. So after running around all day, we were really warm when we sat down and had to fan ourselves constantly until the cold beverages hit the table. 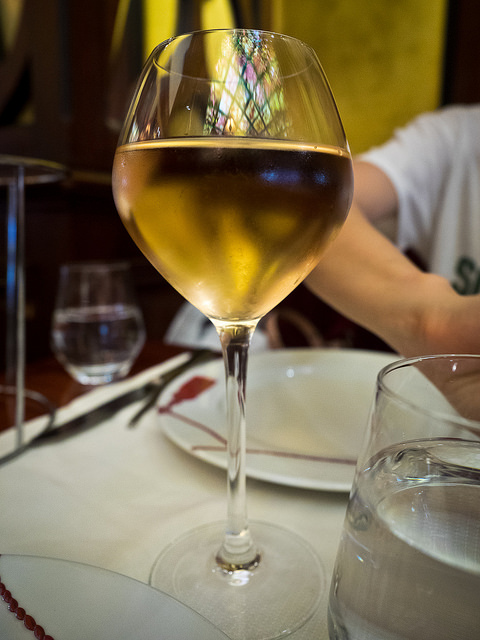 A chilled glass of white wine is what I needed. We’d be having some seafood this night. So this should be the perfect pairing. I’m not a wine connoisseur. So the house wine was just fine. Nothing too fancy for me. Also a glass of tap water, or une carafe d’eau.

Le Grand Café Capucines is a beautiful Art Nouveau restaurant. The stained glass ceiling, the luxurious red velvet chairs, the fancy 6-light lamps, and the wonderful murals all give a sense of beauty and elegance to the restaurant.

The murals are especially striking and each one is unique. All the wall space here is beautifully decorated with these paintings and framed exquisitely with curvaceous and ornate wooden details.

However, the main draw of any gastronomic establishment should be the food. After watching Anthony Bourdain eat his way through a seafood platter on The Layover Paris, I had a craving to try something similar. I don’t think my wife and I could have done a seafood tower, but we wanted to dabble in some shellfish that we rarely have.

So we ordered some whelks and winkles. I’m sure we could probably get some of these here in Vancouver, but it’s not something I’ve noticed on our menus. It’s probably just me not being aware of their existence. The whelks were the larger shells (left side of photo). These had more meat inside and were a little rubbery in texture. The periwinkles were the small black shells and it was a lot of work to get the meat out of them. From a work-to-food ratio perspective, I don’t think it was worth it. In other words, it was a lot of work for getting out a tiny piece of shellfish meat. I probably wouldn’t have periwinkles again.

The other dish we had to try before we left Paris was the beef tartar, or tartare de boeuf. My experience with beef tartar in the past has usually been small bits of somewhat raw meat on the side with plenty of bread to eat it with. Our dish this evening looked like they had just opened up the supermarket package of minced beef and plated it. I know that’s not the case, but it sure looked like it to me. I’m willing to try everything at least once. So I just dug in. It was definitely raw, but tasty. I’m not texture sensitive either, but I could see some folks not liking the raw, slimy feel of the beef in one’s mouth. I only wished there was more bread to go with the beef tartar. 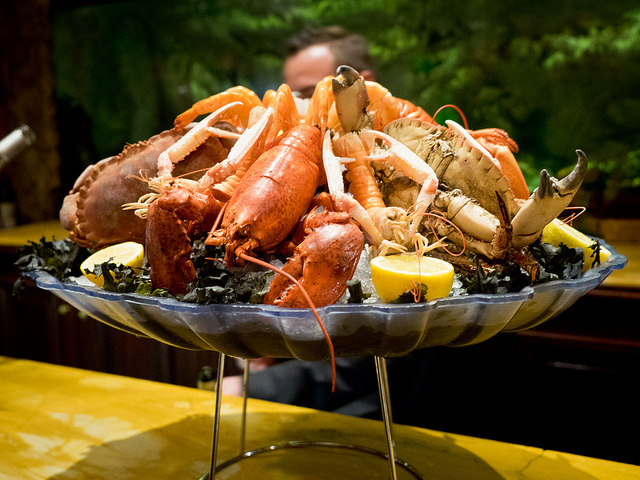 We didn’t have a lot, but we definitely had enough for dinner. I think we were still full from our escargot lunch. As we left, we took a look at someone else’s seafood platter. Look at that lobster’s head. If we were more hungry, we could have demolished a seafood tower.

We also noticed our dining neighbours were Asian, but they spoke Russian. It always fascinates me when I encounter folks of one ethnic background that speak a language that you don’t expect. I suspect they may have been ethnically Central Asian or Mongolian, but they obviously grew up in Russia. 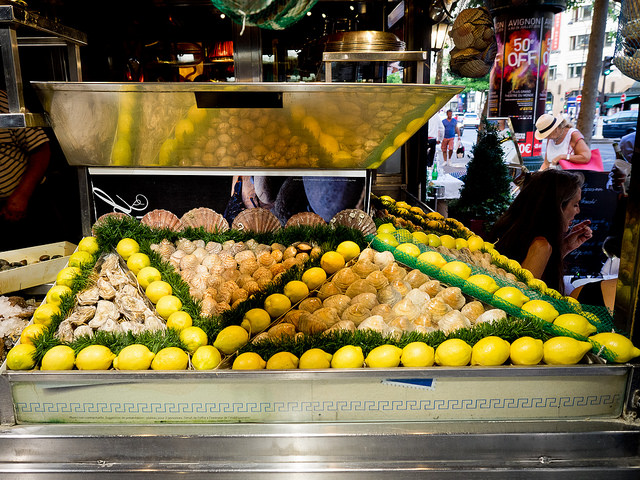 That was it for dinner and that was it for Paris. We’d be flying out early the next morning and back to our regular lives back in Vancouver. It was a great week in Paris that realized a long-time dream to visit France. My wife and I still dream about the food and gush about our experience. We’ll be back…eventually.