The mural search took a huge detour for lunch. I found myself at the Starbucks at the very edge of the Olympic Village. All I had was my iPhone and the Starbucks app to pay for food and drink. At least I had something.

I also decided to open up my Pokemon GO to see if anything was going on in the hood. That’s when I realized there was a blooming triple-lure spot. Couldn’t help but plunk myself in the Bird Plaza for about an hour to rest up my feet before setting out for more murals 😛

When I started up again, I headed up Ontario Street to East 3rd Avenue and stumbled across this beauty. I don’t think was part of the recent Vancouver Mural Festival, but it is a colourfully pensive piece.

I wound myself back towards Main Street and found the “Glow-in-the-dark” mural. Obviously, I can’t confirm if this is really a glow-in-the-dark mural, but that’s what the map told me it was. Sure. Regardless of its iridescent powers or not, it was an impressively giant peacock watching over this back lane parking lot. 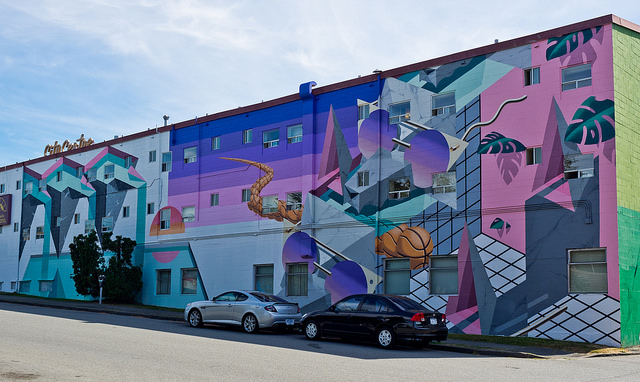 A few blocks up the hill along Main Street, I found the giant north wall of the City Centre Motor Hotel. The geometric shapes, funky colours, and abstract palm leaves make me think of Miami Vice. Was that the idea?

I crossed to the other side of Main and walked over to the Native Education College. Of course, one would find a giant mural in the style of First Nations art over here. Pardon the weird panoramic stitch. Need more practice.

After a quick detour past Sweet Noms (closed upon visiting) and the Main Street Brewing Company (no wallet. so saved some money by not buying anything), I headed up to Broadway.

I got to Broadway in search of a mural marked on the map, but I didn’t see it. I had already reached Sushi Yama on the corner of Broadway and Brunswick. So I turned back around to head for Main Street. Low and behold. I found the mural heading back. Sneaky little devils hiding there in plain sight. 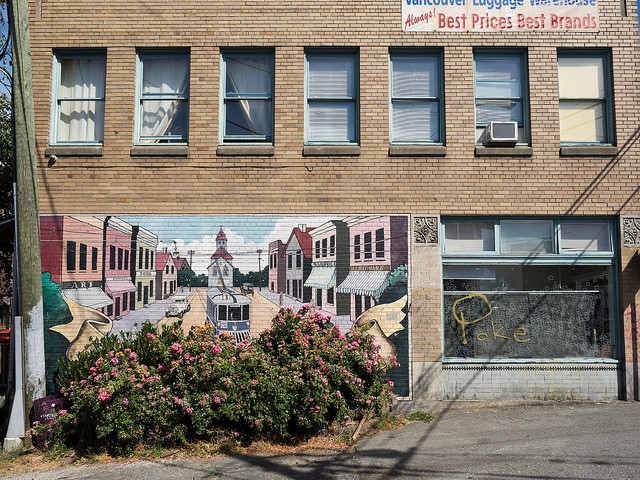 I crossed Kingsway to get into the triangle block sandwiched between Kingsway, Main Street, and Broadway. I walked along Broadway and turned the corner into a driveway/alley. Right at the entrance to the parking area, there’s a older mural that’s been here a long time. Though the bushes are starting to cover it up.

I walked around the block to 8th Avenue and went back west across Main Street. In an alley on the west side of Main Street was a most lovely wall of brilliant blooming magnolias and cute wide-eyed giraffes. The alley was tight and I didn’t have a cool panoramic lens to take a shot. I did the best I could. 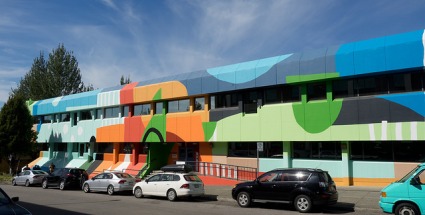 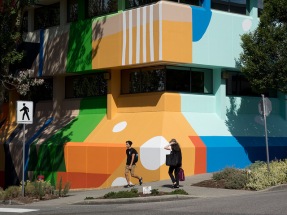 Then finally I walked down to the “Bunker” – aka HootSuite HQ. The brutalist building was formerly a giant grey concrete building. For the Vancouver Mural Festival, it was transformed in a giant colourful palette of geometric patterns.

Still not done. Had to head back up to Broadway and make my way south into Mount Pleasant.