We couldn’t have picked a better day to end our 4 weeks of classes at Hokkaido Japanese Language School. It was our last day and we would be going to see fireworks in the evening. However, along with fireworks, comes yukata. Yukata are traditional Japanese clothing similar to kimono, but they are much lighter and less complex to put on. However, to us, the uninitiated, we needed help to put on these wonderful traditional pieces of clothing.

END_OF_DOCUMENT_TOKEN_TO_BE_REPLACED

Let me start by saying I thought that we were going to be making fans from scratch for my last workshop at Hokkaido Japanese Language School, or JaLS.  Maybe I read the itinerary wrong. In any case, we didn’t make fans. However, we did get to do some neat stuff with our fans. 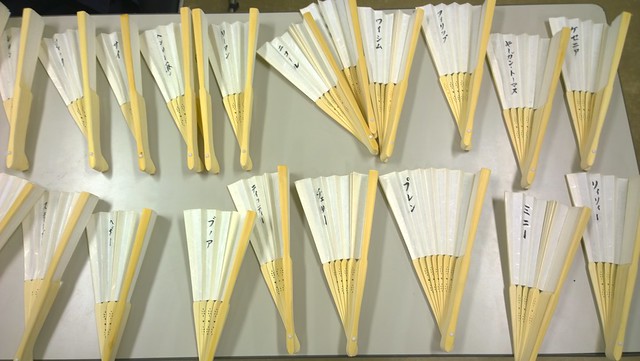 END_OF_DOCUMENT_TOKEN_TO_BE_REPLACED

Disclaimer: I hate cooking and I’m really bad at cooking. Perhaps I was emotionally scarred as a child against cooking or maybe I’m lazy or maybe I’m incompetent. I don’t know. Cooking is one of the most stressful things in my life. It makes me extremely anxious and grumpy whenever I cook.

Given my disclaimer, it’s amazing that I actually enjoyed our afternoon workshop on making Japanese sweets, or wagashi. This was yet another cultural experience workshop put on by the Hokkaido Japanese Language School, or JaLS. A whole gaggle of us students walked over to the Susukino area and to the Chuo Ward Office all the way at one end of Tanukikoji.

END_OF_DOCUMENT_TOKEN_TO_BE_REPLACED

What a way to start my third week at Hokkaido Japanese Language School, or JaLS. We had done taiko drumming the week before. Now on this Monday in July, we were heading off to our next cultural activity of the summer program – the kimono experience.

We headed out as a group to Tanukikoji, a busy covered shopping arcade in Sapporo. It was only a 15 minute walk from our school to a little kimono business, Mitsuki Sakura (美月桜), on the 5th floor of an office building just along the shopping arcade.

END_OF_DOCUMENT_TOKEN_TO_BE_REPLACED

I am so happy that I signed up for the Summer Program at Japanese Language School Hokkaido, or JaLS. All the cultural activities included in the fee are really worthwhile. One afternoon, we were taken out of Sapporo’s centre to an area called Shin Kotoni (新琴似), which is accessible on one of the JR lines out of Sapporo Station.

We ended up in a very residential area of town. There were not many stores around and the station was relatively quiet. It certainly wasn’t a busy transport hub. We walked for about 15-20 minutes from the JR station to a tiny little building on a tiny little residential street.

END_OF_DOCUMENT_TOKEN_TO_BE_REPLACED

ASL, or American Sign Language is the sign language commonly used in Vancouver and across most of North America (the notable exception would be Quebec where they use Langue Signe du Quebec).  Because of my line of work with the Deaf community, I was required to learn sign language.  My first job in Toronto actually held ASL classes onsite.  So I was lucky enough to … END_OF_DOCUMENT_TOKEN_TO_BE_REPLACED

Onto my fourth language – Mandarin. Mandarin is the dominant dialect of Chinese. It is referred to as the common language in Chinese. However, I grew up with Cantonese in my home. So you’d think learning one Chinese dialect when you know another would be easy. Not for me. I didn’t really learn Mandarin until I had finished my university degree and went overseas to … END_OF_DOCUMENT_TOKEN_TO_BE_REPLACED

Growing up in Canada, there are two official languages – English and French.  Growing up in English Canada, you almost always exclusively use English and French is just a language that you find on your cereal box or bag of potato chips and on road signs in national parks. I went to an elementary school that did not have a single French class. That’s really … END_OF_DOCUMENT_TOKEN_TO_BE_REPLACED

During my recent road trip, I got to thinking about my own multilingualism.  Many Canadians are bilingual in education, but for many Western Canadians, we are primarily anglophones in practice.  However, growing up Chinese-Canadian benefited me linguistically.  I’ve been looking at my own language abilities and wonder how it all works in my brain.

Let’s look at my first language, chronologically, but not my best language.

Born into a Chinese family that immigrated in the mid-70’s from Hong Kong, I was exposed to Cantonese right from the beginning.  It may be my first language chronologically, but it is not my strongest.  I speak and understand it fairly fluently, but I often mess up the tones.  For example, I can never separate the words for buy and sell in Cantonese (Both words are pronounced “mai”, but with different tones). I may apply English word order rules to Cantonese much to the amusement of those listening.  I often have word recollection problems in Cantonese where I know the word, but I cannot recall it at that particular moment.

END_OF_DOCUMENT_TOKEN_TO_BE_REPLACED

Back in 2008, I wrote up a short series of posts about the Chinese language.  Because I had recently posted about Chinese Village Kinship, I had a tangential question regarding classification of Cantonese as a language or as a dialect.  I think my previous posts will help to answer that question.  So I’ve linked to all my previous posts below. Chinese Language Written Chinese The … END_OF_DOCUMENT_TOKEN_TO_BE_REPLACED