It’s ready to roll. The first video hits the Net on October 14, 2021 @9:00pm. YouTube has this whole premiere video countdown. But if you are looking for the actual video, here it is. Tune in, like, subscribe, share, and hit the bell for notifications. END_OF_DOCUMENT_TOKEN_TO_BE_REPLACED

After our visit to the Pantheon, we headed down the hill towards the Jardin du Luxembourg. When I was looking at possible apartments to rent, I originally had found one in this area near the Jardin, but that one disappeared quickly after a week of contemplation.

END_OF_DOCUMENT_TOKEN_TO_BE_REPLACED

Hakodate is a city on the southernmost tip of the island of Hokkaido. It’s a port city that figures large in modern Japanese history. It’s the first city in Japan that the American Navy under Commodore Perry opened up to the world at the end of a period of isolation. An important battle at the end of Tokugawa Period and the beginning of the Meiji Era took place here as well. Hakodate is also known for its physical beauty because the city is situated on a tiny isthmus surround by the ocean on both sides and a mountain conveniently located at the southern end of the city to take in this scrumptious city and ocean view.

For our travels to Hakodate from Sapporo, we considered two different modes of travel. The train would have been faster and more comfortable ride, but the price was roughly ¥8,300 one-way/¥16,600 round trip. Looking at a train ride that costs about CAD$170 per person was not what we wanted to spend. Especially when I think of the time to get there as almost the same as a Vancouver to Seattle road trip.

Thankfully, one of our shared-house mates had done the trip to Hakodate previously and took a Chuo Bus. The round-trip ticket worked out to just about ¥8,000 round-trip per person. That was half the price of what it would have cost us by train. Being a transit traveller and passenger train geek, I would have loved to take the Super Hokuto train to Hakodate. However, our budget for staying a month in Hokkaido did not allow for such a luxury. The bus was way more economical.

By toll highway without any stops, the drive from Sapporo to Hakodate is just under 4 hours. However, we had a pit stop at a toll highway rest stop for a half hour and we deviated from the expressway a few townships before Hakodate. So our bus ride was more like 6 hours from station to station.

END_OF_DOCUMENT_TOKEN_TO_BE_REPLACED

One of our shared house-mates had been talking about visiting the “pyramid” park. It sure sounded interesting to visit a park with pyramids. I wasn’t sure what to expect from a “pyramid” park. I envisioned some kitschy kids park with a large colourful pastel playground consisting of pyramids. Sure. Why not? So we had planned to go out there one afternoon after our language classes were done.

We had secured a couple bicycles from another shared house for our afternoon trip to the park. The park was apparently pretty far. With the bicycles ready to go, we set out for the “pyramid” park. However, we forgot to check what the name of the park was in Japanese. Oops.

So we rode out to the northeast of the city. Our house mate knew the general direction of the park, but he couldn’t quite remember exactly how far out the park was. We kept riding north past the freeway and we started to even pass farmland. We were out pretty far from the city limits.

Finally, though, we started to see a tall, pyramidal hill show up on the horizon. That was our destination. Now just where was the entrance exactly? I think we could have entered the park from the south side, but we ended up going to the north side. We locked up our bikes at the northwest entrance to the park.

END_OF_DOCUMENT_TOKEN_TO_BE_REPLACED 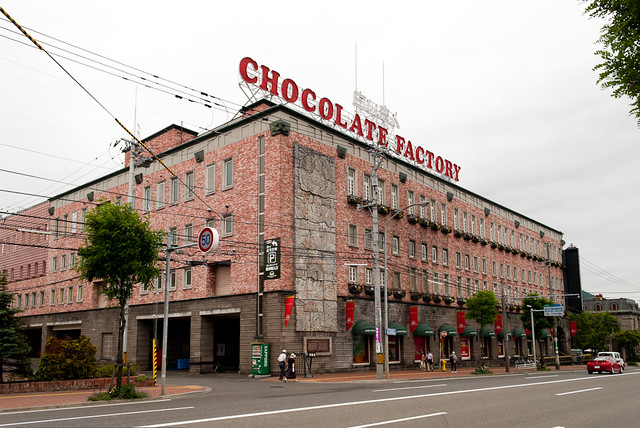 If Japan had a company like Willy Wonka, then Ishiya Chocolate would come really close. Ishiya is a famous Japanese chocolate, candy and biscuit brand in Japan. I’ve had the joy and privilege of eating some of their very fine goods. When my wife and I were planning to come to Sapporo, a visit to the Shiroi Koibito Park, home of the Ishiya Chocolate Factory, was right at the top of our list.

END_OF_DOCUMENT_TOKEN_TO_BE_REPLACED

Here’s another video. This time I had a little time on a sunny Thursday morning. It was pretty quiet in the park, but still some activity going on. I’m still trying to get used to filming with my Nokia Lumia 1020, though. It’s a little odd since the camera lens is actually left of centre when I hold the phone in landscape/horizontal orientation. Anyway, I … END_OF_DOCUMENT_TOKEN_TO_BE_REPLACED

Tai Po is my usual “base of operations” when I’m in Hong Kong. It’s a good 19 km away from Central Hong Kong as the crow flies. By a direct double-decker bus, it’s about an hour’s bus ride in good traffic.

In North American terms, you can think of Tai Po as a suburb (if there is such a thing in Asia). It’s not as busy or crazy as Kowloon and the north side of Hong Kong Island. However, there are plenty of shops and services that would allow people to never leave the neighbourhood if they didn’t want to.

END_OF_DOCUMENT_TOKEN_TO_BE_REPLACED

Where else in the world can you try a Cowboy Sundae, but at the Greatest Show on Earth – the Calgary Stampede.  It’s been a year since last year’s giant 100th anniversary bash.  The 2013 edition runs from July 5 – 14th this year. 2012 was the first time I had ever been to the Calgary Stampede.  Even though I lived in Alberta for many … END_OF_DOCUMENT_TOKEN_TO_BE_REPLACED

Nymph Falls is a nature park that is a part of the Comox Valley Regional District. A friend works for the CVRD and recommended we visit a few of the regional district parks. He had joined us this day for the quick drive out to Nymph Falls. I did a Google Maps search and could not find Nymph Falls. A Google search itself turns up … END_OF_DOCUMENT_TOKEN_TO_BE_REPLACED

Even before I went off to Boston for my conference, I spent a oddly warm, but very welcome, Saturday afternoon with the Rain City Social group for an exploration of Strathcona.

Our walk on a sunny March 25th started at the Dunlevy Cafe. The cafe is on Dunlevy just a few doors down from the infamous East Hastings of the Downtown Eastside. It’s a very trendy and hip cafe to be found just off a rougher stretch in Canada’s postal code. I already had lunch before coming, but apparently there wasn’t much on the menu.  The setting is definitely trendy, though.

Strathcona is a unique mix of buildings.  There are a few churches in the neighbourhood and one of Vancouver’s oldest schools, Strathcona Elementary.  Even the houses are more varied than most Vancouver neighbourhoods.  Normally, you just find single-detached homes all over the city, but Strathcona has single-detached and attached homes alike.  I don’t think there is another neighbourhood with so many row houses.  The lots are different sizes compared to the rest of the city.  There is a very different feel to homes because of these unique lot sizes.