All Monthly Pass Holders Must Use Compass Card

END_OF_DOCUMENT_TOKEN_TO_BE_REPLACED

As I’ve been using my card for a few weeks now, I must say that one has to keep a close eye on one’s account balance. I already had one incident where $2.75 was taken off my card by mistake. Good thing I noticed that money had disappeared off my card when I checked my balance.

END_OF_DOCUMENT_TOKEN_TO_BE_REPLACED

So we’re finally here in October 2015. I’ve already got my Compass Card and loaded it with a 1-zone monthly pass. I get to use the full version of this Compass Card for the first time today. That’s exciting for a transit geek like me. So you might be wondering how I got my Compass Card when it’s not readily available. Also what’s with this October 5th thing I keep hearing about?

END_OF_DOCUMENT_TOKEN_TO_BE_REPLACED 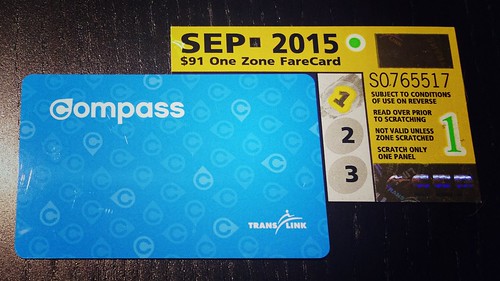 After a two-year wait, it’s finally here in my hands. A real, functioning Compass Card. The new smart cards for use on all TransLink vehicles is available to the general public. I had my taste of the Compass Card 2 years ago as a beta tester, but now I can finally say goodbye to my monthly paper FareCard and to those paper FareSavers that go missing oh so easily.

END_OF_DOCUMENT_TOKEN_TO_BE_REPLACED

Last Thursday, TransLink announced a big move ahead in the Compass Card and new zone-free bus rides for October. Here’s what the Buzzer Blog has to say:

By late October, Compass Cards will be available to the general public to buy for use on all transit services — just in time for monthly pass holders to load November’s month pass on their Compass Card!

After this date, Compass Cards will be available from CVMs, by mail, online, phone request and in person at the Compass retailer network or Compass walk-in centres.

END_OF_DOCUMENT_TOKEN_TO_BE_REPLACED

Another transit policy wonk post here. In an earlier post, I looked at a bar graph talking about the Cost per Boarded Passenger by Sub-Region. It helped to illustrate which sub-regions were the most and least cost-efficient. Here’s another handy graphic from the 2014 TransLink Bus Performance Review [PDF] showing what makes for cost-efficient bus routes.

END_OF_DOCUMENT_TOKEN_TO_BE_REPLACED

A lot of the local media has been featuring the 5 most overcrowded bus routes in Metro Vancouver. That’s a nice and easy headline that people can latch onto. However, that data is actual part of a bigger document that TransLink has released. This document is the 2014 TransLink Bus Performance Review [PDF].

There’s one graph in particular that highlights how TransLink has made buses more cost-efficient over the past 5 years.

END_OF_DOCUMENT_TOKEN_TO_BE_REPLACED

After the No vote has trumped the Transportation and Transit Sales Tax that would have raised $250 million annually for transit service in Metro Vancouver, I got to thinking. Yes, I know it can kill brain cells. Especially thinking about such negative things as the fallout from the No vote to the plebiscite.

Throughout the debate before the votes were all tallied up. I just felt a lot of comments were like YouTube comments. It’s what they call “haters”.

END_OF_DOCUMENT_TOKEN_TO_BE_REPLACED

So the No side had a resounding victory in the Transportation and Transit Plebiscite. It is,I think, an extremely disappointing, but unsurprising result. So where does that leave us as a region. Without stable funding for transit in Metro Vancouver, where do we go from here.

Well, service cuts are probably the first to happen. Transit services for the disabled and the elderly will likely be on the chopping block first.

END_OF_DOCUMENT_TOKEN_TO_BE_REPLACED

Well, if you haven’t heard by now, the results of the Transportation and Transit Plebiscite were 38.32% Yes and 61.68% No. The results are personally disappointing, but not at all surprising.

Gary Mason at The Globe and Mail talks of how the plebiscite was doomed from the beginning.

More than $6-million was spent – no, wasted – by TransLink and a coalition of the willing to underwrite a campaign the public had no interest in supporting. Plebiscite strategists such as Mr. Schlackman could only roll their eyes at the pitiful amount of time the provincial government gave the mayors to try to sell their $7.5-billion vision. In the U.S., transit proponents often have campaign runways that stretch up to two years. The mayors had a few months.

I think his last sentence in the article sums up how I feel about how this plebiscite.

All this plebiscite did was demonstrate what happens when a province’s political leadership abdicates its responsibility to govern.